Unlike displacement, migration is usually understood to have an element of choice. However, climate migration forces people to migrate in a precautionary attempt to avert climate risks or as a response to mounting socio-economic and environmental pressure. While sudden-onset events are more likely to cause displacement, slow-onset events force people to migrate over time as their home land becomes less viable for living and their economic opportunities dwindle.

The term “refugee” in the 1951 Convention Relating to the Status of Refugees does not cover those displaced by or migrating due to climate-related hazards. According to Article 1 A(1) and (2) of the Convention, the term “refugee” applies to those recognized as refugees under the 1926 and 1928 Arrangements, 1933 and 1938 Conventions, 1939 Protocol, the Constitution of the International Refugee Organization, and those who, “as a result of events occurring before 1 January 1951 and owing to well-founded fear of being persecuted for reasons of race, religion, nationality, membership of a particular social group or political opinion,” are “out-side the country of [their] nationality and [are] unable or, owing to such fear, [are] unwilling to avail [themselves] of the protection of that country; or who, not having a nationality and being outside the country of [their] former habitual residence as a result of such events, [are] unable or, owing to such fear, [are] unwilling to return to it.”

It should be noted that according to Article 1 of the General Provision of the Protocol Relating to the Status of Refugees 1967, the temporal and geographic limitations of the 1951 Convention have been removed and are no longer applicable. According to Article 1 of the 1951 Convention, the refugee status is afforded to those “outside the country of nationality” or “habitual residence” who have a “well-founded fear of being persecuted.” Even so, it could be argued that those who migrate because of climate change and climate related hazards do not fall within this definition for two reasons. Firstly, fear of climate change and climate hazards do not fall under the “well-founded fear of being persecuted” mentioned under Article 1 of the Convention. Secondly, climate migration is mostly internal and not cross-border. .

The reasons behind human mobility are numerous and may occur simultaneously or influence one another. For example, climate-related hazards can be indirectly linked with wars and conflicts or exacerbate their impact, forcing people to cross international borders and bringing them into the realm of international refugee law. As climate migration is considered mainly internal and not covered under existing international laws, it can create situations where the country may need to take measures in anticipation of mobility caused by climate related disasters or address the issue of migration and displacement under loss and damage due to climate change.

Migration under the UNFCCC Process

As both climate change and migration take place across borders and regions, international frameworks are just as crucial as domestic laws and policies in addressing these issues. Human mobility was discussed under the UNFCCC in paragraph 14(f) of the Cancun Adaptation Framework and the work plan of Executive Committee of the Warsaw International Mechanism for Loss and Damage (WIM Excom) under its strategic workstream (d) which focused on “enhanced cooperation and facilitation in relation to human mobility including migration, displacement and planned relocation.” The WIM Excom was called to establish a task force on displacement at the 21st session of the Conference of the Parties. This task force was created to “avert, minimize and address displacement related to adverse impacts of climate change” through an integrated approach.

The technical work of the members of the task force led to key findings and gaps related to the issue of displacement. Amongst the gaps identified, it was observed that even though policies were developed at the national level related to climate change and human mobility, there was a lack of policy coordination and coherence. In contrast, international processes such as the UNFCCC or the Cancun Framework identify the need to converge and synergise human mobility and climate change in policies, and each new framework contributes to the coherence of policies. Although human mobility is discussed under UN environmental conventions, the interlinkages between human mobility, labour migration, disaster risk reduction, and human rights, which provide support necessary to mainstream climate and human mobility, are only recognized and identified under other policy processes. Additionally, gaps still remain at the international level since climate change and human mobility are yet to be included in areas related to oceans, wetlands, ecosystems, and water.

Regarding the map out of institutional frameworks and mandates within the UN system, the WIM task force found that the UN system has the functional capacity to assist, and does assist, countries in addressing, averting, and minimizing disaster displacement. Displacement caused by disasters and climate change related displacement are addressed through a number of activities ranging from finance to resilience building. However, these activities are not carried out as work related to displacement or climate change. Additionally, the task force has drawn its attention to the existing state of knowledge relating to the nexus between displacement and slow-onset events. It was found that slow-onset events can cause displacement by turning into disaster situations.

The negative impacts of climate change affect the enjoyment and realization of human rights directly and indirectly. This has been identified by the WIM task force, UN resolutions, and the Committee on Eliminating Discrimination against Women. Although climate change impacts everyone, it has a disproportionate impact on vulnerable groups once different social, economic and geographical factors are taken into account. Girls and women are especially affected by climate change because existing gender inequalities are exacerbated by climate change.

Apart from the migrants themselves, those staying behind are impacted by migration as well. New roles and responsibilities especially for women are created in the centres of out-migration. Taking on these new roles becomes more difficult due to existing social, economic, and legal inequalities. Women often have to overcome strong obstacles to adapt to the changing climate as a result of issues such as lack of land ownership and experience, access to finance, access to technology, and additional burdens of childcare and household duties. It is also observed that during and after disaster situations, and throughout the journey of migration, women and girls are at heightened risk of violence. Indigenous communities are also recognized as groups that are more vulnerable to climate change. Climate displacement has a negative impact on indigenous cultures, and their needs must be taken into account when determining measures to avert, minimize, and address displacement.

There are numerous socio-economic and environmental challenges and opportunities created by climate migration that are felt differently by those left behind, those moving, and the population of the hosting location. On the one hand, migration promises better economic opportunities for those moving, allows them to send remittances, and thereby reduces poverty in the sending location. On the other hand, migrant labour can be exploited and migrants might be restricted in their access to critical services and basic rights. Furthermore, the stress on resources in the hosting location will increase with the influx of migrants. This can result in conflicts between migrants and the population of the hosting location. The biodiversity of the hosting location will be impacted by the increase of migration, creating the need for enhanced resource management to avoid over exploitation of resources, and a depletion of natural resources. Thus, sustainable and effective solutions and decisions must be made at a local, national and an international level.

The WIM task force emphasised the need for an integrated approach which takes into account international human rights standards. Consulting those impacted by climate change to bring about recommendations on displacement might help address these inequalities between men and women, within women groups and other vulnerable groups.

Better integration of women in policy and planning as well as greater participation of women in disaster risk reduction can help them benefit from migration and displacement. While this requires capacity-building, strengthening women’s roles in the decision-making process will help create more coherent and gender-inclusive policies. Other vulnerable groups like indigenous communities, people with special needs, children, youth, and the elderly should also be taken into consideration, and their needs and rights should be addressed from policies to implementation. Furthermore, climate migration needs to be managed to create a sustainable outcome rather than a cycle of migration resulting in resource constraints. Countries must address the vacuum created in rural areas due to migration, and the way by which migrants are absorbed into the economic and environment systems of the receiving location to avoid tensions between migrants and the community of the receiving location. Furthermore, laws and policies must be put in place to guarantee the protection of the rights of migrants throughout the journey and thereafter. Helping migrants to capitalize on opportunities and accommodating them temporarily or permanently will require a cross-sectoral approach from infrastructure development to health and individual skills development.

Whether directly or indirectly, it is clear that climate change has an impact on human mobility and exacerbates existing socio-economic vulnerabilities. Migration and displacement create challenges and opportunities, and states will have to ensure that those impacted by climate change are integrated into the decision-making process to address migration and displacement and reduce risks and vulnerabilities.

Convention Relating to the Status of Refugees (1951).

General Recommendation No. 37 on Gender- related dimensions of disaster risk reduction in the context of climate change (2018). https://tbinternet.ohchr.org/Treaties/CEDAW/Shared%20Documents/1_Global/CEDAW_C_GC_37_8642_E.pdf

Protocol Relating to the Status of Refugees (1967)

Report of the Task Force on Displacement (2018)https://environmentalmigration.iom.int/sites/default/files/2018_TFD_report_16_Sep_FINAL-unedited.pdf

Serdeczny, O. (2017) What Does It Mean to Address Displacement “ Under the UNFCCC?: An Analysis of the Negotiations Process and the Role of Research. German Development Institute. https://climateanalytics.org/media/dp_12.2017.pdf

UNFCCC. (2016, May 19). Human Mobility and The Paris Agreement. https://unfccc.int/news/human-mobility-and-the-paris-agreement 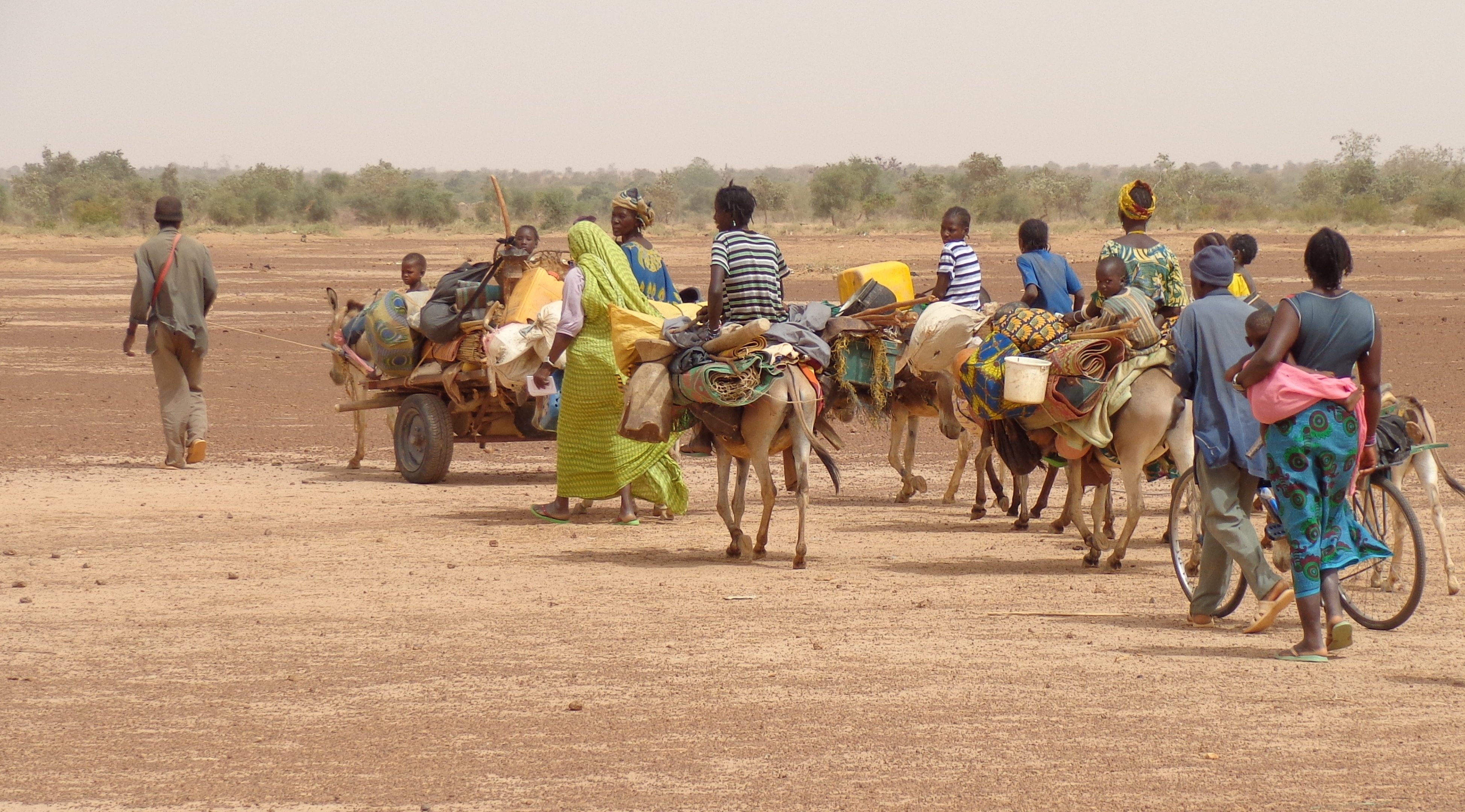